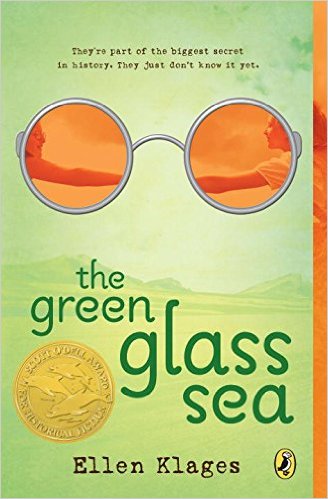 Green Glass #1. Author: Ellen Klages. Summary: Dewey Kerrigan is tired of secrets, but she has learned to live with them. At eleven years old in 1943, she has accepted that much of her father’s life is classified, for he is at work on “The Gadget”, a project so secret the military base they live on officially doesn’t exist. Fascinated by science and mechanics, she has always been something of a loner. Suzie never wanted to be a loner. Isolated as she is on the military base, she tries to be friends with the “popular girls” equivalent, but their personalities just don’t mesh. She’s a little bit curious about ‘Screwy Dewey’, as the other girls call her, but she’s not going anywhere near her, lest the other girls reject her. Until the two girls are thrown together in a surprising turn of events… and meanwhile, almost unbeknownst to the children, their parents are changing history as they create the top secret Gadget. My Thoughts: Because Suzie and Dewey are isolated from the war in a remote research base, and know very little about their fathers work, the war does not form a major part of the story despite the time-period….