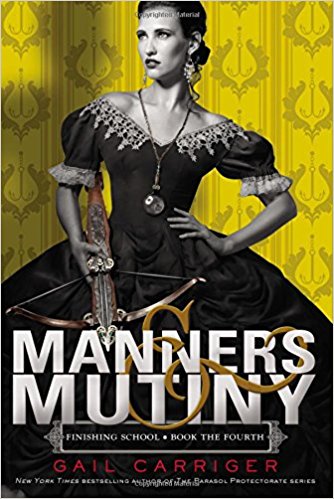 Finishing School #4. Author: Gail Carriger. Summary: If one must flirt…flirt with danger. Lessons in the art of espionage aboard Mademoiselle Geraldine’s floating dirigible have become tedious without Sophronia’s sweet sootie Soap nearby. She would much rather be using her skills to thwart the dastardly Picklemen, yet her concerns about their wicked intentions are ignored, and now she’s not sure whom to trust. What does the brusque werewolf dewan know? On whose side is the ever-stylish vampire Lord Akeldama? Only one thing is certain: a large-scale plot is under way, and when it comes to fruition, Sophronia must be ready to save her friends, her school, and all of London from disaster–in decidedly dramatic fashion, of course. My Thoughts: The mysteriously shady picklemen and their (probably) nefarious plans have finally coagulated into a real, substantial threat. One that, given the goofy nature of the books, seems surprisingly real for the steampunk setting: mass control of mechanicals. Given society’s wide-spread reliance, they could create complete havoc in a matter of hours. Sophronia rises to the challenge with commendable selflessness and an A-level grasp on her intelligencer lessons, creating a satisfyingly climatic final book. So the main plot: good. The side-romance-plot: errrr……. 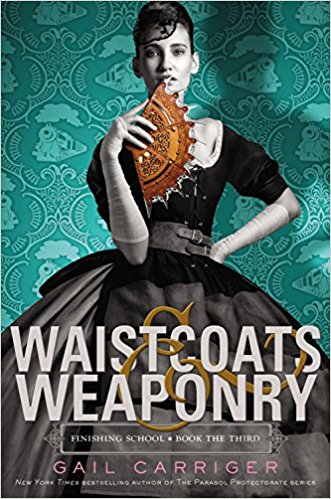 Finishing School #3. Author: Gail Carriger. Summary: Class is back in session…. Sophronia continues her second year at finishing school in style–with a steel-bladed fan secreted in the folds of her ball gown, of course. Such a fashionable choice of weapon comes in handy when Sophronia, her best friend Dimity, sweet sootie Soap, and the charming Lord Felix Mersey hijack a suspiciously empty train to return their chum Sidheag to her werewolf pack in Scotland. But when Sophronia discovers they are being trailed by a dirigible of Picklemen and flywaymen, she unearths a plot that threatens to throw all of London into chaos. With her friends in mortal danger, Sophronia must sacrifice what she holds most dear–her freedom. (Published summary) My Thoughts: A slightly different setting here than the previous books – rather than lessons and plots at school, most of the book takes place over a single (stolen) train ride. With Sophronia trapped in close quarters with both Felix and Soap, she’s finally forced to confront her feelings and figure out what’s going on here. About time, too; I think she’s enjoying the attention and care offered by both boys, while avoiding any real commitment. The seduction class (… 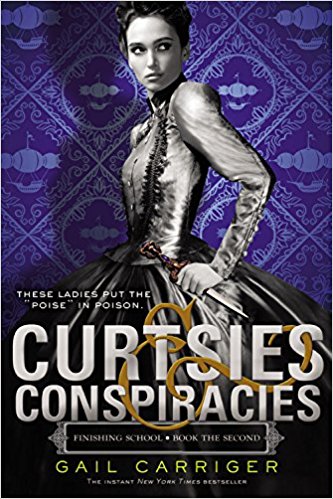 Finishing School #2. Author: Gail Carriger. Summary: Does one need four fully grown foxgloves for decorating a dinner table for six guests? Or is it six foxgloves to kill four fully grown guests? Sophronia’s first year at Mademoiselle Geraldine’s Finishing Academy for Young Ladies of Quality has certainly been rousing! For one thing, finishing school is training her to be a spy (won’t Mumsy be surprised?). Furthermore, Sophronia got mixed up in an intrigue over a stolen device and had a cheese pie thrown at her in a most horrid display of poor manners. Now, as she sneaks around the dirigible school, eavesdropping on the teachers’ quarters and making clandestine climbs to the ship’s boiler room, she learns that there may be more to a field trip to London than is apparent at first. A conspiracy is afoot–one with dire implications for both supernaturals and humans. Sophronia must rely on her training to discover who is behind the dangerous plot–and survive the London Season with a full dance card. (Published summary) My Thoughts: Whoo-boy, everything’s revving up. Rather more flirting, a good bit more paranormal involvement, new mechanical-inventions; let’s just throw in more of everything! I do think Sophronia needs…

The Rithmatist #1. Author: Brandon Sanderson. Summary: More than anything, Joel wants to be a Rithmatist. Rithmatists have the power to infuse life into two-dimensional figures known as Chalklings. Rithmatists are humanity’s only defense against the Wild Chalklings. Having nearly overrun the territory of Nebrask, the Wild Chalklings now threaten all of the American Isles. As the son of a lowly chalkmaker at Armedius Academy, Joel can only watch as Rithmatist students learn the magical art that he would do anything to practice. Then students start disappearing―kidnapped from their rooms at night, leaving trails of blood. Assigned to help the professor who is investigating the crimes, Joel and his friend Melody find themselves on the trail of an unexpected discovery―one that will change Rithmatics―and their world―forever. (Published summary) My Thoughts: Great fun. How often do we get a magic-school story where the main character is one of the “muggles”? And this unusualness leads to an awesome partnership, our two main characters combining their strengths to work together. More, the magic system itself is quite unique. Magic circles have, of course, been around for a while; and we’ve seen moving drawings before. But combining them into a two-d magic system based…

Hex Hall #1. Author: Rachel Hawkins. Summary: Three years ago, Sophie Mercer discovered that she was a witch. It’s gotten her into a few scrapes. Her non-gifted mother has been as supportive as possible, consulting Sophie’s estranged father—an elusive European warlock—only when necessary. But when Sophie attracts too much human attention for a prom-night spell gone horribly wrong, it’s her dad who decides her punishment: exile to Hex Hall, an isolated reform school for wayward Prodigium, a.k.a. witches, faeries, and shapeshifters. (Published summary) My Thoughts: Bland. Pretty boring. I may be spoiled by all the epic fantasy I read, but I just wasn’t drawn into the story-world; there’s no particular world-building and the characters seem petty and dull. I do think it’s all right to use a pre-existing set up, like basic werewolves and vampires, without any extra worldbuilding, so that you can jump straight into your story and focus on the action without explaining anything; or even just because you like that world. It does run more risk of being boring, though, especially when the action focuses around a strange on-off romance/attraction and a ghostly grandmother whom we all (except the main character) know is up to no good…. 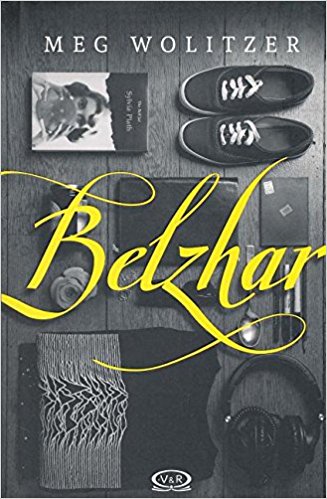 Author: Meg Wolitzer. Summary: If life were fair, then Jam would still be living in her house in New Jersey and would be spending time with her cool English boyfriend Reeve. Instead, she’s at a home for troubled, genius teens. This special school is known for teaching a class on one book. Jam is chosen to take this class and the book that will be analyzed is The Bell Jar by Sylvia Plath. Additionally, the students have to keep a journal in which they are supposed to confront the truth and resolve issues from their past. Will Jam be able to overcome her traumas? (Published summary) My Thoughts: I wonder what you call this genre… not exactly magical realism, but that almost feels closest. Not fantasy. Not realistic. Hm. Anyway. I like the genre type, and the pacing and suspense throughout the story was quite good, but the main character aggravated me. I don’t want to spoil the whole ending, but I was severely disappointed to find out her real backstory. Content Review: Sexual Content: “Among us only Hannah Petroski had an actual, long-term boyfriend. The two of them were really serious, and had almost had sex.”/ ‘Seth put his… 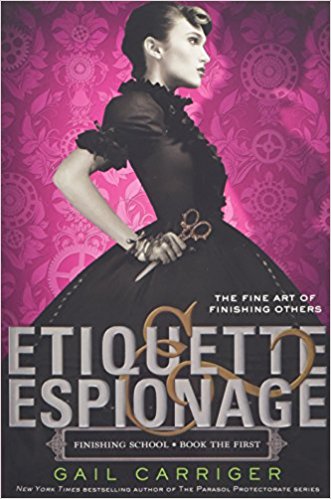 Finishing School #1. Author: Gail Carriger. Summary: It’s one thing to learn to curtsy properly. It’s quite another to learn to curtsy and throw a knife at the same time. Welcome to Finishing School. Fourteen-year-old Sophronia is a great trial to her poor mother. Sophronia is more interested in dismantling clocks and climbing trees than proper manners–and the family can only hope that company never sees her atrocious curtsy. Mrs. Temminnick is desperate for her daughter to become a proper lady. So she enrolls Sophronia in Mademoiselle Geraldine’s Finishing Academy for Young Ladies of Quality. But Sophronia soon realizes the school is not quite what her mother might have hoped. At Mademoiselle Geraldine’s, young ladies learn to finish…everything. Certainly, they learn the fine arts of dance, dress, and etiquette, but the also learn to deal out death, diversion, and espionage–in the politest possible ways, of course. Sophronia and her friends are in for a rousing first year’s education. My Thoughts: Total fluff, but really fun. The perfect thing for some really light back-to-school reading to get back into studying mode. In this paranormal steampunk setting young Victorian ladies are going to a floating finishing school to learn proper etiquette, from…