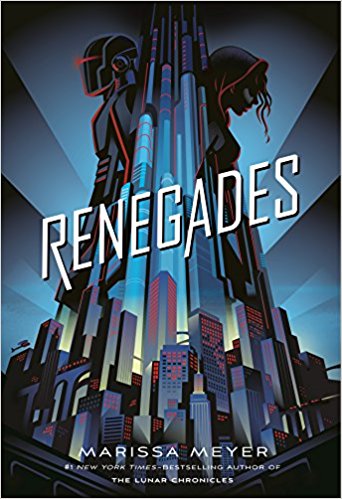 Renegades #1. Author: Marissa Meyer. Summary: Secret Identities. Extraordinary Powers. She wants vengeance. He wants justice. The Renegades are a syndicate of prodigies―humans with extraordinary abilities―who emerged from the ruins of a crumbled society and established peace and order where chaos reigned. As champions of justice, they remain a symbol of hope and courage to everyone…except the villains they once overthrew. Nova has a reason to hate the Renegades, and she is on a mission for vengeance. As she gets closer to her target, she meets Adrian, a Renegade boy who believes in justice―and in Nova. But Nova’s allegiance is to the villains who have the power to end them both. My Thoughts: I think we’ve all been waiting to find out what epic twist Marissa Meyer was going to put on the classic superhero schema. Sure, the plot sounded totally cliche, but obviously she had secrets up her sleeve. …Right? Wrong. Completely, utterly, trustingly mistaken. The world-setting/backstory bears staggering resemblance to Steelheart (which Marietta first pointed out), the superpowers are no different than anything Marvel might introduce, and the romance is thread-bare and tired. Here’s the thing: I love Meyer’s other books and characters. They’re inventive, relatable, and fun….