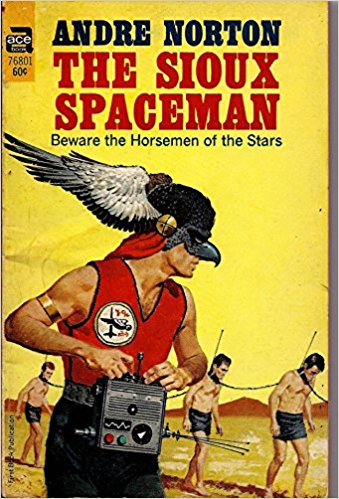 Author: Andre Norton. Summary: Kade Whitehawk had two strikes against him in the Space Service. First, he had bungled his assignment on the planet Lodi. Second, he believed all creatures had a right to freedom and dignity – and having such opinions was strictly against the rules. But when he was assigned to Klor, he found the Ikkinni there – tortured yet defiant slaves of a vicious tyrant race. Right then Kade swung at the last pitch. For rules or no rules, THE SIOUX SPACEMAN knew that he had to help these strange creatures gain their freedom… and that he alone, because of his Indian blood, had the key to win it for them. (Published Summary) My Thoughts: I like Andre Norton, but this was definitely one of her meh stories. Ye normal humanoid aliens + fairly earthen-type planet, and a straight forward simplistic plot – maybe she felt like she had to spice it up a bit by playing around with the racial issues she did? I don’t know, but it seemed like an odd choice.