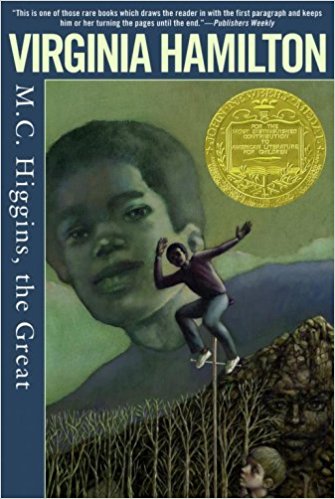 Author: Virginia Hamilton. Summary: Mayo Cornelius Higgins sits on his gleaming, forty-foot steel pole, towering over his home on Sarah’s Mountain. Stretched before him are rolling hills and shady valleys. But behind him lie the wounds of strip mining, including a mountain of rubble that may one day fall and bury his home. M.C. dreams of escape for himself and his family. And, one day, atop his pole, he thinks he sees it — two strangers are making their way toward Sarah’s Mountain. One has the ability to make M.C.’s mother famous. And the other has the kind of freedom that M.C. has never even considered. (Published summary) Content Review: Sexual content: Boy remembers trying to steal a kiss from a girl. Boy kisses a girl against her will. Language: Shoot. 1 d*** Violence: Character cuts a rabbit’s throat. Character is kicked in the forehead. Girl punches a boy when he tries to steal a kiss. Character cuts another slightly in the back with a knife during a fight.