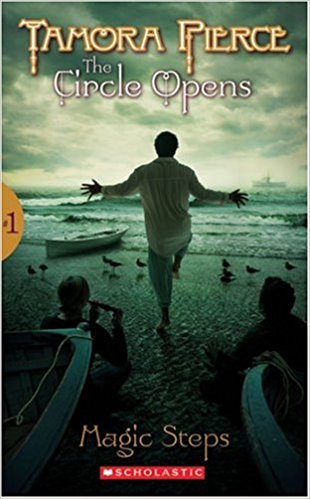 The Circle Opens #1. Author: Tamora Pierce. Summary: While caring for her uncle in Summersea, Lady Sandrilene Fa Toren witnesses a boy working a most unusual spell. Pasco can dance magic, but he wants nothing to do with his powers. It’s up to Sandry to teach him about his magic–and to convince him he can use it to get to the bottom of a series of gruesome murders. Content Review: Sexual content: Character thinks it would be good for another character if he fell in love again. Language: There are only a few odd uses such as ‘cat dirt’ and ‘rat turd’. Violence: Heavy. Second hand story of three people strangled. Body is found severely hacked and the head cut off. Character learns that an entire family was murdered. Horses are crippled with cuts to the hock (and belly). Character is attacked, head cut off. Street brawl. Baby murdered with a knife, and a little girl, and a man. Woman run through with knife. A healer beheaded and her assistant killed. Three characters with unmagic running through them are torn apart when the unmagic is called out, and ‘explode’.