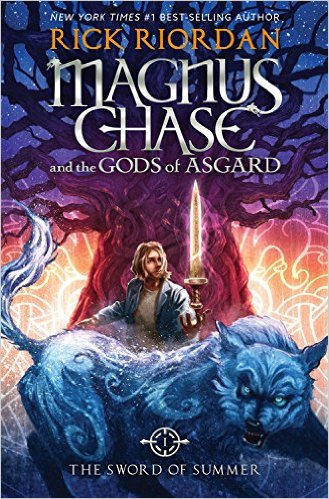 Magnus Chase and the Gods of Asgard #1. Author: Rick Riordan. Summary: Magnus Chase is a homeless kid who’s mother is dead. He’s doing pretty well, surviving by his wits and a pair of friends, but everything goes wrong one day. First his uncle is trying to track him down for the first time in years, then a fire-god attacks him, and the next thing he knows he’s dead. Things just get weirder from there when he finds himself in Asgard. Content Review: Sexual content: Once a character wakes up to someone knocking on his door and hastens to open it before realizing he’s in his underthings. Language: 1 d***, a couple of uses of the exclamation “gods”. Violence: High. Too high to go into details; not very detailed or graphic, but there’s a lot of fighting and stabbing, and due to the nature of the story there’s a good bit of ‘killing’ of ghosts who just come back. Other issues: The main character is homeless, admits to having stolen before. The story is about Norse gods being real, and he interacts with them after dying.