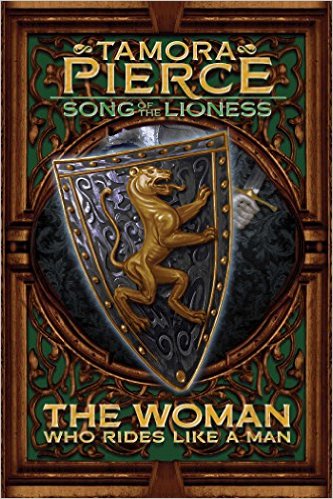 Song of the Lioness #3. Author: Tamora Pierce. Summary: Newly knighted, Alanna of Trebond seeks adventure in the vast desert of Tortall. Captured by fierce desert dwellers, she is forced to prove herself in a duel to the death — either she will be killed or she will be inducted into the tribe. Although she triumphs, dire challenges lie ahead. As her mythic fate would have it, Alanna soon becomes the tribe’s first female shaman — despite the desert dwellers’ grave fear of the foreign woman warrior. Alanna must fight to change the ancient tribal customs of the desert tribes — for their sake and for the sake of all Tortall. Content Review: Sexual content: “Some of the most intelligent women I knew growing up were prostitutes.” Multiple kisses. Girl moves her things into a man’s bedroom. Possibly implied sexual intercourse? If so, it’s vague enough implication I couldn’t be sure. Language: Low. Violence: Sword fight with hillmen in which several hillmen are killed. Magical fight, in which several hillmen are killed. Multiple foiled magical attacks, shaman dies from overusing his life force in magic. Man dies of illness.