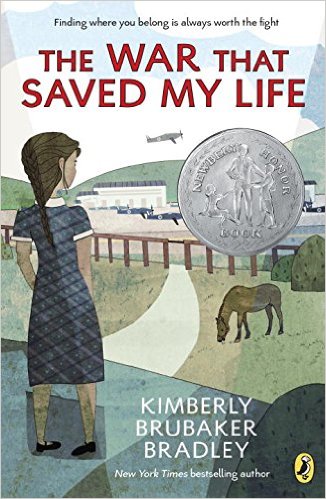 Author: Kimberly Brubaker Bradley. Summary: Nine-year-old Ada has never left her one-room apartment. Her mother is too humiliated by Ada’s twisted foot to let her outside. So when her little brother Jamie is shipped out of London to escape the war, Ada doesn’t waste a minute—she sneaks out to join him. So begins a new adventure of Ada, and for Susan Smith, the woman who is forced to take the two kids in. As Ada teaches herself to ride a pony, learns to read, and watches for German spies, she begins to trust Susan—and Susan begins to love Ada and Jamie. But in the end, will their bond be enough to hold them together through wartime? Or will Ada and her brother fall back into the cruel hands of their mother? (Published summary.) Content Review: Sexual content: None. Language: 1 bloody, 1 derogatory term Violence: Although it’s not very present in the book, Ada’s mother severely abused her. Ada flinches every time someone raises a hand near her for weeks. She’s afraid to go into an air-raid shelter because it reminds her of the cupboard she was locked in as punishment. World War I is happening, and there are air-raids….