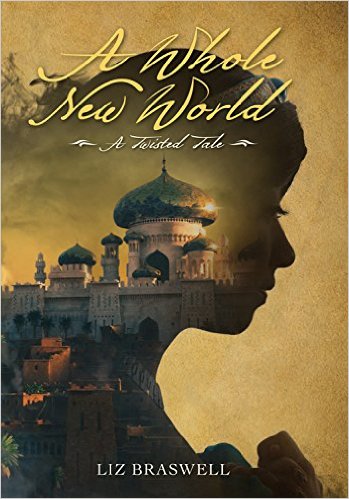 Twisted Tales #1. Author: Liz Braswell. Summary: What if Aladdin never used the lamp? When Jafar steals the lamp and begins maximizing his wishes for world domination, Aladdin and Jasmine are going to have to unite, bringing rich and poor, royalty and thieves, together to take down the tyrant enslaving their city. My Thoughts: Meh. The characters were flat and the story-line, despite all the promises, was predictable and didn’t explore any of the exciting possibilities. There’s nothing inherently wrong with this re-telling, it just lacks depth and tension. Content Review: Sexual content: Scantily clad dancing girls in parade. Some light kissing. Language: 3 d*** Violence: Monkey attacks a man with claws. A thief is roughly arrested and dragged away. One character shoves another of a balcony, killing him. Magician hurls a tame tiger across a room, smashing him into a wall. Character crushed by a falling column. One character stabbed. Magic twists a man’s head around until his neck snaps. Character knocked out with a blow to the head.